Where did you grow up and a bit about your childhood…

I grew up on Mercer Island, Washington, a small city right outside of Seattle. My brother and I were raised by my two parents, and constantly surrounded by family. Both my mom’s Italian family and my dad’s Russian-Jewish family are located in the Seattle area. The love and involvement of my immediate and extended family were defining aspects of my childhood, and continue to be fundamental to my identity.

As a child, I was highly involved in sports, trying out everything from softball, to ballet, to basketball to swim team. I also got involved in a variety of other activities, such as drama, which I did only briefly, as well as playing the flute in the band and volunteering through National Charity League, which I did for many years. Growing up, I had the privilege to try many different sports and activities, to discover life-long passions and interests.

Where did you go to college and what was your major and interests?

I attended Occidental College, where I double-majored in English and Comparative Literary Studies, and Spanish. Both my majors fostered my passion for reading, writing, and language. Outside of school, I played on the Occidental varsity women’s soccer team, played flute in the Caltech-Occidental Band, taught tutored low-income elementary students, wrote for the school newspaper, and helped organize Relay for Life. I also had the opportunity to intern with two public interest law firms in Los Angeles advocating for children’s rights in the dependency and delinquency systems. I enjoyed this direct service work, and witnessed the power of the law to improve people’s lives. These experiences helped me decide to apply to law school.

How did you end up in Argentina for a year and what were you involved with and how did it all end up before you left?

One of my best college experiences was studying abroad my junior year. I spent six months living and studying in Buenos Aires, Argentina. I fell in love with Argentina, whose culture cherishes friendships and familial ties. In Buenos Aires, despite its bustling, cosmopolitan nature, people take the time to foster relationships, and often spend hours chatting with a friend in a café. Having grown up in a society that emphasizes strict schedules and timeliness, I found this flexibility refreshing. The people were incredibly warm, the culture strikingly vibrant.

Even before I’d left Buenos Aires, I knew I would return. My senior year of college I applied, and was selected as a Fulbright Scholar to teach English in Argentina. It was my dream job, and I couldn’t have been more thrilled.

After graduation, I returned home to Seattle, where I lived for the next six months prior to my departure to Argentina. I studied for and took the LSAT, already planning to apply during my year abroad. I also worked as an assistant preschool teacher, a position I’d held at various times during college.

What were your responsibilities there? Why was this so important to you?

As an English Teaching Assistant, I provided support to the university English professors at Bahía Blanca’s Universidad Nacional del Sur, helping with activities and doing presentations, and led conversation classes focused on cultural issues. I also started and led a movie club, in which we watched American movies and discussed their significance in light of American and Argentine culture. Through my work with students, we were able to engage in a cultural exchange, simultaneously raising awareness about our own cultural misconceptions: I learned a great deal about Argentine culture in addition to aspects of American culture I had previously taken for granted. Similarly, my students were exposed to American culture and forced to examine their own cultural assumptions.

As a secondary project, I founded and coached the first women’s soccer team at Universidad Nacional del Sur. During my first weeks in Bahía Blanca, I visited dozens of English classes, sharing my proposal to start and coach a women’s soccer team at UNS, and encouraging the young women to join. My idea was met with a discouraging mixture of confusion, incredulity and laughter. This resistance, however, was accompanied by a strong curiosity: I was invited to speak on the radio, present to coaching groups, interview with the local newspaper, and appear on television to discuss my ‘radical’ vision. I utilized the opportunity to explain that yes, I play soccer well, and yes, I also paint my nails.

I was not the only one with a story to tell. Dozens of Argentine women wrote to me about their love of soccer and growing up playing with brothers and friends, but never having the chance to play on a team. Just three weeks after my arrival to Bahía Blanca I walked onto the small dirt field as a first-time coach, and faced 20 women eager for their first-ever practice.

Many of them stood before me despite their parents’ disapproval and their friends’ laughter. We had no idea that within eight months, the 60 women of Club Atlético Caditz, as my players named the team, would be competing in the first-ever inter-university tournament in Bahía Blanca, and traveling to play in northern Argentina. We were just excited to be playing soccer.

I started learning to tango while studying abroad in Buenos Aires. I first danced when a friend took me to a class, which she failed to mention was for advanced dancers. Despite being mortified by my complete inability to dance, I was immediately fascinated by the dance, at once passionate, powerful, and delicate. I resolved to learn. I took a class in Buenos Aires and continued dancing in Seattle, where I was surprised to discover a large tango community.

Tell me about some special moments and events… Good and hard… and how are your friends and soccer team doing in Argentina?

As the women soccer team’s Directora Técnica, I learned more than anyone. As some of the women tripped over the soccer ball, I stumbled over my words, trying simultaneously to create a passing drill and form the past perfect subjunctive in Spanish. I learned to be creative and resourceful with language; I learned to laugh at my mistakes. I also found the strength to assert myself. When we were given a basketball court for a tournament I organized, I demanded a better field; when men 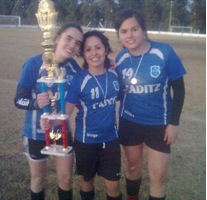 questioned my ability to coach, I found strength in my players’ enthusiasm and the team’s solidarity. I adapted drills to accommodate a player with a developmental disability. I discussed playing time and team selection with angry players, realizing that I could not please everyone.

Coaching Fútbol Femenino at UNS transcended simply explaining an outside cut, or running a defensive drill. Admitted into these women’s lives, I came to understand the significance of soccer in Argentina, where baby boys are given membership to a club before their own names. As I formed personal relationships with my players, I learned the disempowering effect of being excluded from the sport. At its essence, leading Fútbol Femenino at UNS was about empowering women through access to an important social and cultural activity, playing soccer together to achieve social equality, and having fun.

Leaving my soccer team was one of the hardest things I have ever had to do. During my year in Bahía Blanca, the girls on my team had become such a special part of my life, and it was incredibly painful to leave. I was happy, however, that my co-coach would continue to lead the team after I had left. The team would continue, and despite the pain of leaving, I was comforted that I was leaving something that would only grow and flourish.

I continue to stay in contact with the girls on my team. The team has expanded, and is training regularly and travelling to play in tournaments. The girls recently informed me that the Argentine national university athletic tournament added this year, for the first time ever, women’s soccer. Club Atlético Caditz was invited, and will compete this September.

How did you feel about the team using your name on their jerseys? Was it your idea?

When the girls surprised me with the team name and jerseys, I was extremely honored and flattered. It was a pretty overwhelming moment for me. About six months have past since I left Argentina, and yet I can’t say that I’ve ever gotten totally used to seeing my name on the jerseys. Sometimes I see a picture of the team, and there is a second where I wonder what my name is doing all over their uniforms.

What are your near future plans?

As a first year law student, I hope to survive, complete and enjoy the next three years of school. I hope to balance academics with my passions: playing soccer, speaking Spanish, and advocating for underserved communities.

What are your goals?

With my law degree and Spanish fluency, I hope to advocate for the educational rights of children and youth in marginalized, Spanish-speaking communities. Throughout life, I hope to maintain and foster my relationships with family and friends, the ties which bring joy and meaning to my life.

Will you keep in touch and tell us about your new adventures?

utorials about WordPress, blogging, social media, and having your say on the web.

Cuteness, in all its versatility
Lens Cap
Thought Catalog

Thought Catalog is a digital youth culture magazine dedicated to your stories and ideas.

Laura Barcella
How Not To Starve

practice theories of theory and practice

More than a wall flower and less than living for the applause, (no dis to Gaga) there is a place of recognized exposure. A nice place.

The life of a writer and survivor of loss.

this is... The Neighborhood

the Story within the Story

Dating, Dilemmas and Disasters for the Modern Girl

This WordPress.com site is the cat’s pajamas